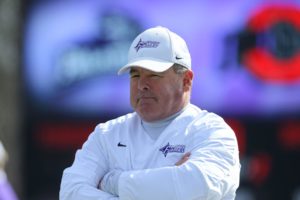 A 37-year veteran of collegiate coaching. He was the 2017 Southern Conference Coach of the Year and served as the head coach of the Furman  University Paladins for the past seven season.  Prior to Furman he served as the head lacrosse coach at the United States Naval Academy from 1994-2011. During his time at Navy he led the Midshipmen to a 142-97 (.589) record. In his 23-year career as a head coach, including four years at the University of Baltimore, Richie compiled a 162-120 (.585) ledger.

Richie was named head coach of the U.S. men's national senior team by US Lacrosse in December of 2012. He is the 12th head coach in the history of the men's senior team program, and he will lead Team USA in its title defense at the 2014 Federation of International Lacrosse (FIL) World Championship in Denver, Colo., July 10-19, 2013.

During Richie's head coaching tenure at Navy, his teams claimed five Patriot League regular season and tournament titles, appeared in seven NCAA tournaments, and racked up 39 All-America citations. In 2004, Navy advanced to the national championship game and Richie was honored with the Morris Touchstone Memorial Award as National Coach of the Year. He also was twice named Patriot League Coach of the Year (2004 & '07).

Richie began his coaching career as an assistant at Duke University in 1977. Following a two-year stint in Durham, he moved on to the University of North Carolina, where he served as an assistant for one year before accepting his first head coaching job at the University of Baltimore (1980-83). In 1984 he was named defensive coordinator at Navy (1984-88) before returning to Chapel Hill (1989-90) for a two-year stint as offensive coordinator. He accepted the same post, as well as an instructor's role in physical education, at the United States Military Academy in 1991, remaining there for three seasons, before returning to Navy as head coach in 1994, becoming the seventh lacrosse mentor in school history.

In addition his coaching duties with the Midshipmen, he also served as a tenured professor of physical education and is a Senior Fellow at the Vice Admiral James B. Stockdale Center for Ethical Leadership at the Naval Academy.

He has served the sport in a variety of administrative positions, including the U.S. Intercollegiate Lacrosse Association Rules Advisory Committee, U.S. Lacrosse Men's Coaches Council, and NCAA Rules and Equipment Committee. Since 2005, he has been president of the Intercollegiate Men's Lacrosse Coaches Association (IMLCA) and over the last two years has served as executive director of the Wounded Warrior Project Lacrosse.

A native of Williston Park, N.Y., Richie attended and played lacrosse at Nassau (N.Y.) Community College. He then transferred to the University of North Carolina, from which he graduated with a B.A. in 1976 with a degree in parks and recreation administration. He later added an M.S. from UNC in 1979.

Richie is a member of both the New York Metropolitan Long Island Lacrosse Hall of Fame and University of Baltimore Athletic Hall of Fame.

He and his wife, Sue, have three daughters: Jillian, Shannon Grace, and Cassidy.