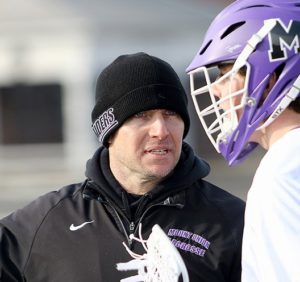 Brian Stewart is in his seventh season as head men's lacrosse coach at the University of Mount Union.  He led the Purple Raiders to a second place finish in the Ohio Athletic Conference's inaugural season of 2014.

Prior to coming to Mount Union, Stewart spent two seasons as an assistant coach at his alma mater Limestone College in Gaffney, South Carolina.

Prior to returning to Limestone, Stewart spent five years serving in the United States Navy. He was commissioned as an ensign in 2006 and was stationed at the Naval Academy Prep School as part of the athletic department.  He was promoted to Lieutenant Junior Grade in 2008 and full Lieutenant in 2010. The latter came after he was ranked No. 1 among his peers.

Stewart served as the head lacrosse coach of the Naval Academy Preparatory School from 2006-2011 and was responsible for all facets of the program. Among his many accomplishments in that role were coaching 27 High School All-Americans and the graduation of 89-percent of the 72 lacrosse recruits sent to the Naval Academy Preparatory School over the five years.

His additional duties as a commissioned officer included serving as the event coordinator for home athletic contests, an assistant lifting coach, maintaining athletic facilities and serving as an academic advisor to all student-athletes. He was also responsible for overseeing the plan of the day over a 24-hour period, ensuring that safety of the command is maintained and documenting daily events in the command log book.

As a men's lacrosse player at Limestone from 1998-2002, Stewart played for NCAA Division II National Championship teams in 2000 and 2002, an NCAA Finalist in 2001 and four straight Deep South Conference Championship teams that went undefeated in the regular season.

After graduating from Limestone with a bachleor's degree in Liberal Arts, Stewart was an Assistant ED Instructor at Corkran (Md.) Middle School from 2003-05 and an Assistant Co-Taught Instructor at CMS from 2005-06. During the latter time frame, he served as the boy's head lacrosse coach at North County (Md.) High School and oversaw the junior varsity program.