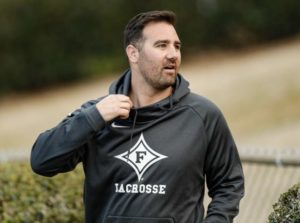 Andrew Athens, a native of Baltimore, MD, is a graduate of Ann Arundel CC and Presbyterian (SC) College where he served two years as captain and finished his career as PC's all-time leader in points, goals, and assists.

Coach Athens first full-time coaching job was at Queens University in Charlotte, N.C., where he served as the Royals' top assistant and defensive coordinator, leading Queens to a Conference Carolina playoff appearance.  Since then Coach Athens has been the Defensive Coordinator and Associate Head Coach at Furman University.

Coach Athens is one of ten (10) children, and six (6) of them played collegiate lacrosse, including two sisters who were college All-Americans and currently coach at the collegiate level. His father, Colonel Art Athens, USMCR, (Ret.), played lacrosse at the Naval Academy in the mid-70’s, and serves today as the Director of the U.S. Naval Academy’s Center for Ethical Leadership.