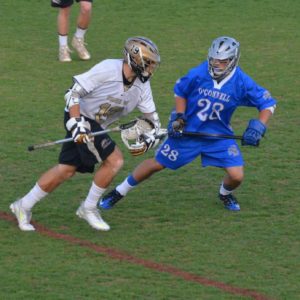 Reilly Madden is a native of Northern Virginia. He brought his Greater DC area lacrosse knowledge to the Atlanta area early in 2019. He began playing lacrosse at age 5 and hasn’t put the stick down since then. Throughout his youth career, he was on several developmental travel teams and was a member of the U15 Junior Olympics gold medal team.
In high school, Reilly played at The Landon School and St. Paul VI Catholic High Schools. He was the team captain his senior year and a 3-year varsity letter winner. During his high school career, his team was nationally ranked 3 of the 4 seasons. He missed his junior season due to shoulder surgery but stayed involved coaching the Junior Varsity team as Offensive Coordinator.
After graduating high school, Reilly elected to play varsity football at the University of South Carolina under legendary head coach, Steve Spurrier. While he stepped away from playing collegiate lacrosse, he kept up with the game by continuing to string sticks and take part in men’s leagues. He also helped to coordinate the King’s Challenge lacrosse tournament held in Richmond, VA.
Post-collegiately, Reilly worked in Private Wealth Management as a financial advisor, keeping up with his love of helping others. He also founded Athletes Guide, a website that connects Division 1 athletes with high school and youth athletes for individual sports training and mentoring. Reilly is a member of the East Cobb Lacrosse Club Hedgehogs and continues to learn and develop his game today!
Reilly is an avid Nationals, Capitals, and Packers fan. He likes to golf when he isn’t shooting the ball on the lacrosse field or managing the Division 1 athletes on his platform.